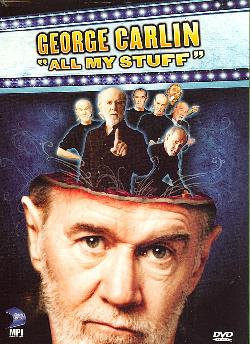 Contrary to the name of this box set, it hardly includes everything George Carlin has done. For example, you won’t find any of Carlin’s 1970s albums, nor George Carlin: 40 Years of Comedy (1997) (which never ended up being released for home video until the release of Commemorative Collection (2018)) or Carlin’s final HBO special, It’s Bad for Ya (2008), made after the release of this compilation.

There is however plenty here in this 14-disc DVD set. Besides the remaining HBO specials, there’s also the George on George interview which had been originally made for the Completely Carlin (2003) box set, plus an exclusive 75-minute audio conversation with Carlin taped in April 2007 as part of the XM Radio Artist Confidential Series.

I must confess, I didn’t buy this when it was released, as I already owned multiple releases of much of what’s here. In any case, this is a still a good purchase if you own little to no Carlin on DVD and find it for cheap. As expected, it’s cheaper to buy the whole set instead of buying the titles individually. There are still a few titles here which don’t show up on the two earlier box sets, The George Carlin Collection (2001) and Completely Carlin (2003).