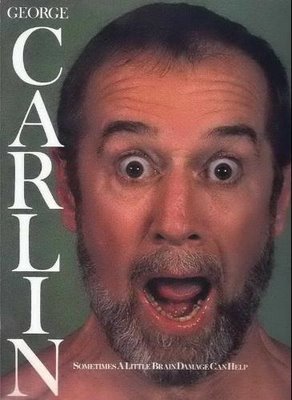 I never even knew that this book existed until one day when I saw it listed on Wikipedia. I had always assumed that Brain Droppings (1997) was his first book. It didn’t help of course that interviewers, press releases, and I think even Carlin himself referred to Brain Droppings as his “first” book. In any case, once I first learned of Sometimes a Little Brain Damage Can Help, I immediately looked up and bought a used copy through good ol’ Amazon.com.

In Carlin’s 2007 interview for XM’s “Unmasked”, he described Sometimes a Little Brain Damage Can Help by saying:

“It was actually a magazine-sized item to be sold at concerts. I wanted to put out some material in there, so I threw pictures in too because you have to have pictures in it. It’s kind of a pseudo-book. Kinda quasi-book.”

As Carlin’s description implies, this book isn’t really in the style of his later books, in several different ways. Rather, it’s a 9x12” book with about 38 pages, in color. So physically it’s rather like a tour book you’d get at a rock concert. A lot of the material here showed up on earlier and later releases, including a few routines that finally made it to When Will Jesus Bring the Pork Chops? (2004), and even at least one line that showed up in It’s Bad for Ya (2008) (about God having a three-day weekend). That’s what surprised me the most about this book: that so many of these thoughts from his later years had already been in his head since at least 1984.

The phrase itself “Sometimes a Little Brain Damage Can Help” was later used on the backs of some George Carlin t-shirts he’d sell at the shows. It also shows up in Brain Droppings (1997), sometimes acting as a subtitle of sorts.

Since I couldn’t find much of any other information on the book, and was curious myself as to which material had or hadn’t shown up elsewhere, I’ve taken the time to write a page-by-page description of what’s inside: