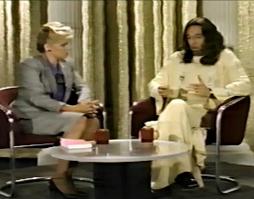 This wasn’t an album nor a stand-up comedy special, but I thought I’d mention it here anyway, because he wrote it along with 3 other writers, incorporating some of his past routines. It remained unaired and completely unreleased until it was finally included in Commemorative Collection (2018).

Apt 2-C (sometimes written as “Apt. 2c”) was described as “A comedy film showing a fictional day in the life of George Carlin, at his apartment where he lives.” The single pilot episode was filmed in 1984 but unfortunately the series never happened.

The pilot takes place in a New York apartment. Carlin plays a writer named “George” who is trying to get some work done, while he’s constantly interrupted by people coming to his door. Stand-up comedian Blake Clark plays a stereotypical redneck who’s obsessed with UFOs. Lucy Webb of the HBO comedy sketch show Not Necessarily the News plays a paranoid neighbor. Bobcat Goldthwait plays Bobby Green, an insane neighbor who needs advice for job interview.

At some point, George turns on the TV to watch one of his favorite talk shows, which turns out to be a shortened version of his “Interview with Jesus” routine, performed by himself and Lois Bromfield as the interviewer (note that the original album version had actress Denny Dillon, not Bromfield). Carlin’s real-life daughter Kelly plays a punk Girl Scout who comes to his door to sell cookies.

Here’s a description from the biography 7 Dirty Words:

Prefiguring Seinfeld, the premise of Apt. 2C featured an apartment-dwelling writer constantly distracted by the shenanigans of his eccentric friends and neighbors, who included [Pat] McCormick, [Bobcat] Goldthwait, stand-up comic Jeff Altman, and Lois Bromfield (whose sister, Valri, had appeared on the first SNL). Carlin’s daughter Kelly played a Girl Scout. Despite the writing talent rounded up for Apt. 2C, [Chris] Rush could tell that the constraint of working with a writing team was unproductive for Carlin. “If you’re a gunfighter for twenty-five years, and all of a sudden they ask you to be a group leader in an advertising agency – you’re not good at working with people, you know?” says Rush, who had a part in the pilot but backed out. “I told him, ‘I see what you’re trying to do, but it’s falling short.’” At one point an HBO executive gave Carlin some notes on the network’s suggestions for improvement, including recommendations to tone down the four-letter words. Not surprisingly, that pretty much sealed the show’s fate. Carlin had wanted to push the network on Rush’s own idea for a show, a mind-boggling conceptual thing he called Innertube. “After Apt. 2C lit a bomb,” says Rush, “that was the end of that.”

The “Interview With Jesus” routine was once uploaded on Bromfield’s official site at some point, and until the DVD release that seemed to be the only footage fans ever saw. But the clip doesn’t seem to be up on her site anymore.