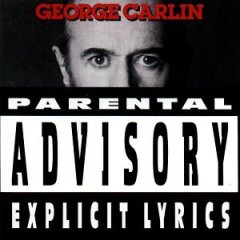 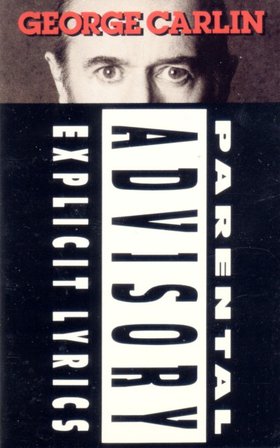 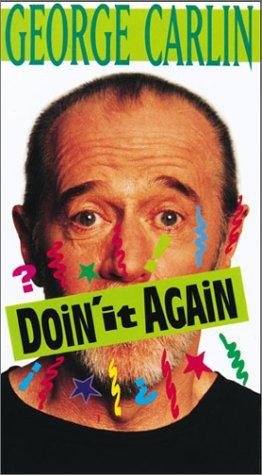 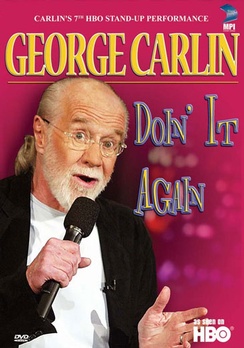 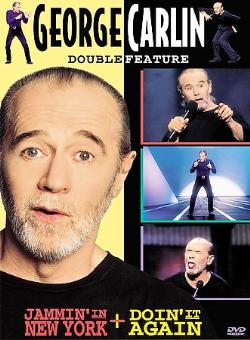 Doin’ It Again was the name of Carlin’s 1990 HBO special. When the same routines were released as an album, the album was called Parental Advisory: Explicit Lyrics. Even though I had known about Carlin’s work for several years up to this point, it was around this time that I seriously started to get into him as more than just a casual fan, making the effort to seek out and buy his albums and videos, just as I would for a favorite band.

The album comes with the following warning on the back:

NOTICE: This recording contains no backmasking or subliminal suggestions. All messages from the Devil are recorded clearly and audibly in straightforward Standard American English.

PLEASE! Try not to commit suicide after listening to this album.

Also included in the liner notes are two quotations:

About this recording, George Carlin said the following in Last Words:

“The 1990 and 1992 HBO show were where things really gelled. 1990 was the first time that the improvement in my new strengths in writing met up solidly with my heightened political sense. It wasn’t a Jammin’ in New York, but it was a good step beyond what had happened in ‘88, as ‘88 had been beyond ‘86. One reason may have been […] We’d finally discovered not to do HBO shows on the West Coast. Californian audiences just sit there trying to decide whether they’re going to go to the beach tomorrow or Magic Mountain. Not a lot of concentrated energy in a Los Angeles audience.”

When I was in the eighth grade, rumor had it that a universal warning label was going to be applied on any and all albums deemed to have “Explicit Lyrics”. Some rumors extended that to a ban of these albums all together. This was a few years before the whole trial of 2 Live Crew; all that shit had yet to go down. This was however one of those things that traced back to the efforts of Tipper Gore and the PMRC. I led a few other middle schoolers in petitions going in an effort to top this, and getting as many students to sign as we could. My older friends in the high schools did the same. I created petition sheets at home on my father’s photocopy machine. As socially divided as the rap fans and headbangers were at this time, here was one cause we could both agree on. Would the petitions really go anywhere? Would signatures from people who weren’t even old enough to get a drivers’ license, really matter? Be effective? No. But I sure didn’t think that at the time.

Regardless, the world got stuck with the standard warning sticker you see today. As you can see, Carlin realized that if he was going to be required to put the sticker on the album, he might as well make the whole cover and title the sticker.

The video release was first on VHS, with the white background cover. It was later re-released on DVD, paired as a double feature with Jammin’ In New York. Then it was re-released on DVD with an older picture of George on the cover.