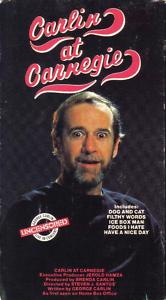 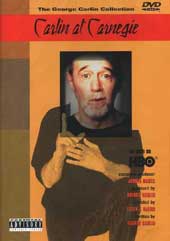 This was probably the first Carlin HBO special I saw in full. I had heard my friend recite parts of it to me before, and knew I had to check it out. I don’t know how I ever managed to rent the video with my parents’ approval; they were big on restricting stuff with any swearing or other “R” rated material. But I did get to see it. In any case, I have a special fondness for it, which is interrelated to my love for A Place for My Stuff (1981). You’ll notice a lot of titles here from that album: “Abortion”, “Rice Krispies”, “Have a Nice Day”, “Ice Box Man”, and “Fussy Eater”. Carlin adds a few new twists and more material to some of these pieces.

The special opens with Carlin asking people on the streets of New York “How do you get to Carnegie Hall”, and getting a variety of answers. “Professional Comedian”, “Heart Attack” (where he talks openly about the second heart attack he had suffered, while watching a baseball game at Dodger Stadium in 1982), and “The Musical Portion of the Show” are new routines. “New News” is a piece where he recites a series of fictional news announcements, similar in style to the ones he did on previous albums.

Now in the world of comedy, there are several routines which are typical “hack” stand-up routines. These are the jokes that we’ve heard thousands of comedians do before (women hate seeing the toilet seat up, how terrible airline food is, etc.). The differences between dogs and cats is admittedly one of those hack routines. However, Carlin’s “Dogs & Cats” routine here was still years before it became something other comedians did to death, has its own Carlin style to it, and most importantly, is hilarious too. Some of the jokes are recycled from the “How’s Your Dog?” routine from On The Road (1977).

And finally, the show closes with “Filthy Words”. Like the track of the same name from “Occupation: Foole”, Carlin examines some of society’s taboo words and phrases. Though he has lots and lots of new inclusions and observations. The night ends with a reading of his compiled list of hundreds of such words. By the mid 1990s, the list had grown to be “An incomplete list of impolite words: 2,443 filthy words and phrases compiled by George Carlin.” The entire list was put on posters, sold at the merchandise booth at Carlin’s live shows. I bought one in the mid 1990s at one of his shows. I had it on the front door of my bedroom in my fraternity house in college, and it managed to survive. It’s now framed and on the wall next to my bed.

“‘Carlin at Carnegie’ in 1982 was the pivotal event in my career after the drift and confusion of the late seventies. The material wasn’t stellar: with the exception of the heart attack sweepstakes and “Seven Dirty Words” (included by special request of Mr. Fuchs), it was mostly ‘A Place for My Stuff’. As usual I was unhappy with my performance. […]

I was back at Carnegie Hall, where I’d been ten years earlier at the height of my first breakthrough. I’d shown I could bounce back from a near-fatal Big Ticker Event and joke about it. The lack of focus, the tentativeness, the hey-man looseness of the seventies had all vanished. I took the stage from the moment I came on and held it till I left. Sure, there were some fluffs and shot timing and nervousness, but the first hints of a new voice were emerging with an edge to it that hadn’t been there before. […]

When it came out in early ‘83 it was a ratings smash. Within weeks we were selling out double shows again […] Carlin at Carnegie was the real beginning of a relationship with HBO that over the next twenty-five years first incubated my artistic development and then set the seal on it. Without that anchor I don’t know how exactly I would have evolved as a performer and an artist. You could say as HBO grew, I grew, but it wasn’t just the size of the audience and the fact that it was self-selecting. The constant need for a new hour of material every couple of years kept me fresh and productive. And HBO’s absolute lack of censorship was liberating. Whatever topic I chose, people I attacked, language I used, views or opinions I expressed, I never heard: “We’d rather you didn’t…”, “We’d prefer if you’d…”, “Could you change/tone down/leave out … ?” Even in the vicious, repressive atmosphere of the Bush years, they’ve never wavered.

HBO’s Carlin at Carnegie special was the last time I ever recorded a version of “Seven Words You Can Never Say on Television.” There was no need. For the first time, all seven were on television.