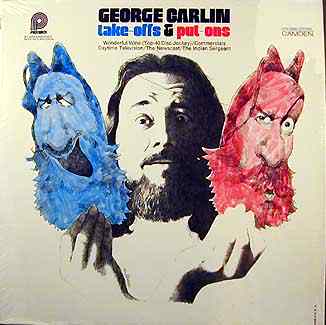 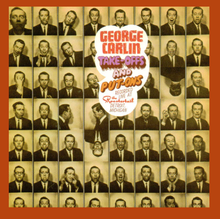 When I was in high school, my friend Frank had found this in his parents’ house, either in his attic or his garage. Knowing that I was a Carlin fan, he showed it to me. I had never seen it or heard of it up until that time. (Keep in mind that these were the days long before the internet had become a house-hold thing. Also the days when vinyl had already been replaced by cassette tapes, and the album had yet to be released in any other medium).

This album is the best example we have of Carlin’s late 1960s material, being a more straight-forward “safe” comedian. Still funny, though. Some of the routines here later showed up revised on FM & AM (1972). Carlin also revamped “The Indian Sergeant” as a routine about cavemen in his book Brain Droppings (1997).

Take-Offs and Put-Ons was nominated for a Grammy, but lost that year to Bill Cosby’s album Wonderfulness.